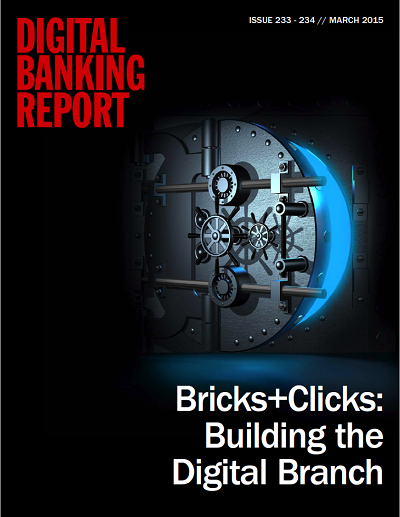 Bricks + Clicks: Building the Digital Branch is the definitive guide to how banks and credit unions worldwide are transforming their distribution network to reflect the realities of a digital marketplace.
As was the case with ATMs decades ago, consumers want the convenience of new technologies, combined with the assurance of a local branch. Despite this affinity for branches, the economics of yesterday’s branch network don’t work. The number of branches as well as the size and function of remaining branches must reflect today’s realities.
What is required is a ‘bricks + clicks’ distribution model, significantly reducing the number of branches and digitizing the back and front office of remaining branches with a mobile-first perspective. Universal bankers need to replace traditional tellers, and remote advisory services need to be supported.
Bricks + Clicks: Building the Digital Branch provides an in-depth look at how banks and credit unions are changing branching strategies to reflect consumer needs and today’s digital capabilities. Written in conjunction with Jeanne Capachin, this report provides insights into how financial institutions worldwide are integrating digital technologies with human interaction.
The overview of new technologies, case studies and best practices is intended to help stimulate thinking beyond today’s norms.

Currently, we are unavailable to chat. Please enter your message here and we’ll respond within one business day.